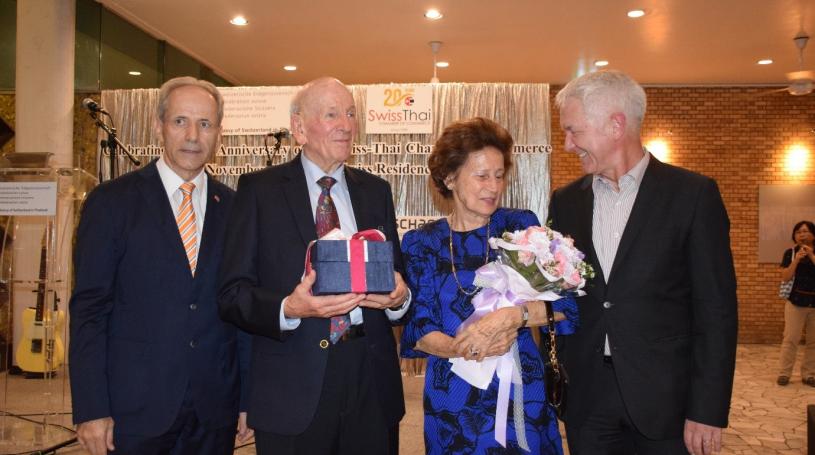 It is with profound sadness that we inform you that our friend and Honorary President Paul Somm passed away peacefully on Friday, 30 July, loosing the battle to age related diseases in Hua Hin. Paul was the President of the Swiss Thai Business Association from 1997 to 1998 and founding father and President of the STCC from 1999 to 2001. I met Paul the first time when I moved from New York to Bangkok in 1997 and was instantly impressed by his fluency in the Thai language and his deep understanding of the Thai business culture. Paul introduced me to the Swiss Thai business community and cultural heritage of this vibrating city. I will be forever grateful to him.

Paul was born on 29 March 1929 in Altnau, Thurgau, and moved to Bangkok in 1952, at 23 years of age. He wanted to discover the world and joined his uncle who worked at Diethelm Co. His charming fiancée Milly joined him later and on 25th January 1958 they got married in Bangkok and have been together ever since. In 1957, Paul was elected as President of the Swiss Society Bangkok and in 1959 he was one of the co-founders of the Swiss School in Bangkok. Shortly thereafter he was elected as President of the School Board. In 1967, he returned back to Switzerland to assume a management position at Diethelm Company in Seebach, Zurich. In 1981 he joined Bernina in Switzerland and in 1991 he moved back with Milly to Thailand to assume an executive position at Bernina in Lamphun. In 1997 Paul was elected as the President of the Swiss Thai Business Association, the predecessor of the STCC, and under his leadership the STCC was officially inaugurated on 13 October 1998. Paul acted as its first President until 2001 and was then granted the title of Honorary President for his great contribution to the Swiss Thai Business community and the STCC in particular.

In 2001 Paul founded the Thai Swiss SME Centre in Pranburi, where he also set up his residence.  He stayed active in managing his SME Centre until the final years of his eventful life. He always kept a positive outlook in life and was an inspiration to many people who were privileged to get to know him. Paul leaves behind his wife Milly and his children Christopher, Mark Alex and Diana. On behalf of the Board of Directors I extend our deepest sympathies to Milly Somm and her family.

We shall remember Paul as a loyal friend, an active promotor of Swiss businesses in Thailand, and the first president of the STCC.